Hanging With The Coolest Kid

Most politicians were not cool at school. They were the swots, the nerds, the children for whom extra homework was an opportunity, not a curse. Such application led to good universities, the right contacts brought them appointments as researchers for political organisations and, ultimately, a seat in Parliament, but those days of being mocked and, worse, ignored at school leave deep marks. Ed Balls (possibly the only time I will mention Ed Balls in writing) told about being bullied when he was running for Labour leader – no doubt, he was not the only one. Somewhere deep in their driven souls, almost all politicians wish that they were one of the cool kids, the ones who effortlessly got the girls and breezed through school, always in the right place at the right time because these kids were the place and time.

However, there is one politician who is effortlessly cool, who one could imagine sharing a stage with John Coltrane and Miles Davis and not looking out of place, and that of course is Barack Obama. Whatever one thinks of his politics, none of his predecessors (with the possible exception of John Kennedy) could have pulled this off:

Now, I’m not the only one to have noticed the way other statesmen suddenly start acting like giddy schoolgirls when in Barack Obama’s presence, witness this photo of Gordon Brown making eyes at the object of his adoration: 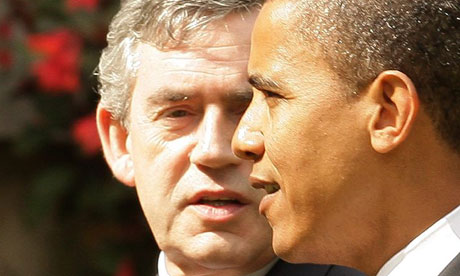 Apart from the obvious fact that, as validation for a political career, an interview with the most powerful man on earth rates pretty highly, I would also argue that somewhere in their ambition eaten souls, these politicians have returned, for an instant, to their childhood and they are exulting that, finally, after all their work, they are getting to hang out with the coolest kid on the block.