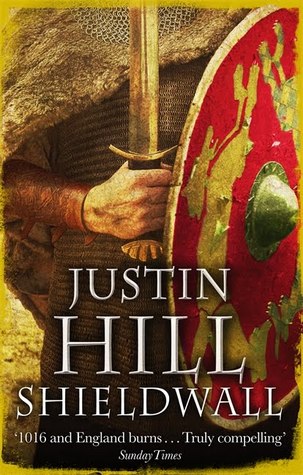 Shieldwall is, I think, the best evocation of late Anglo-Saxon England that I’ve read. It’s the turn of the second millennium and England is cursed with probably the worst king it has ever suffered – Ethelred – and also, strangely but equally, the country is cursed with a people that are too faithful to their unworthy king. Despite Ethelred’s cowardice, duplicity and treachery, they stick with him through everything. Hill does a fine job of showing the reader how intertwined the House of Cerdic, the kings of Wessex, had become with the very idea of England, so that, despite Ethelred’s manifest incapacity as king, no one attempted to depose him. The author shows us an England that is still strong in its bones, in the deep layers of its society, but with its sinews wasting away before the depredations of the Danes and the treachery of some of the English nobility. Although at times a difficult read, there is perhaps no more apt Anglo-Saxon era to write of, for their poetry is suffused with regret, with the passing of things and the transience of life, and this is the history of the eventide of a culture and civilisation.

The only real drawback to the story is that it is almost too painful to read, but the author draws the reader along with prose that’s muscular and, often, stamped out with the alliterative metre of Anglo-Saxon verse. It might be an easier read for someone unfamiliar with the history of the period, but for me, knowing what was coming next, meant that there were days when I couldn’t bring myself to pick the book up and read further. As the first part of the Conquest trilogy, I suspect things are not going to get better! However, I will wait for volumes two and three with mingled eagerness and trepidation.

My only real criticism is that the paperback edition I read had a surprising number of proofreading errors. For the next edition it might be worth going over the text again. Otherwise, an enthralling, if painful, read.